If You Think Daylilies Are Only for Spring, Think Again!

Daylilies are one of the most colorful and commonly planted perennials in today’s home and commercial gardens due to their almost indestructible nature and wide variety of colors. While dazzling in their beauty, the truth is that each bloom lasts only a day; hence the Latin genus name Hermerocallis, a name taken from the Greek words for “beauty” and “day.”

While this may seem to be unbelievably short for such a thing of beauty, please note that it is not uncommon for a single bloom scape; i.e., the bloom stalk of the daylily plant, to have 10 - 40 buds, and very few of the buds on a stalk will bloom on the same day. More precisely, the number of “branches,” on a bloom scape will determine how many possible blooms you can have on a single day, as each branch can usually have one bloom each day. Therefore, it is common for a single plant of a modern cultivar of the daylily to bloom from one to three weeks each season. Daylilies also come in a rainbow of colors, with the only two colors not represented in all of the available varieties being green and blue; however, hybridizers are making progress in introducing some bluish and greenish tinting into some new varieties. So, what has this got to do with daylilies and late summer or early fall blooming? The answer is…“everything!” 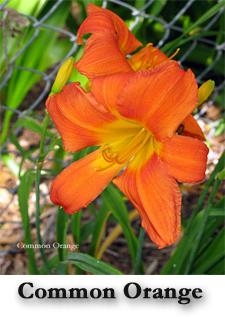 From the humble beginning of the common daylily as an orange flower, approximately 4 ½” across and on bloom stalks approximately 40” tall, with 10 or fewer buds per stalk, and found in English Gardens blooming during a couple of weeks in late May and early June, this perennial has evolved into the current daylily with its approximately 62,000 named varieties in almost every color and hue of the rainbow and in bloom diameter from 2½” to more than 12”, with bloom scape (stalk) height from 10” to over 50.” The current bloom season for these ~62,000 varieties is now divided into one of eight categories centered on the prime bloom season in whatever geographic location of the world in which you may find yourself.

The prime bloom season for the DFW Metroplex is generally considered to be late May through mid-June, with slight perturbations on those dates from year-to-year based on the coldness of the preceding winter, how much moisture you have relative to the norm and how “early” or “late” spring may be with its amount of moisture, again relative to the norm. Expanding on this prime bloom period, specific daylily cultivars are identified by their normal bloom period as follows: 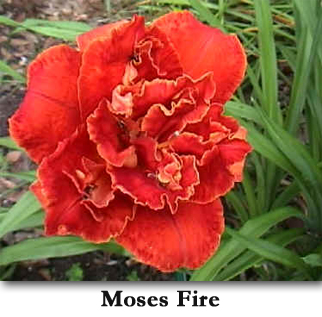 This is a real plus and is the key to an extra long bloom season! For the DFW Metroplex, this basically translates to a bloom period that could possibly begin as early as mid-April and extend through September for the gardener who has varieties that begin very early and those that are very late rebloomers.

In addition to enjoying daylilies throughout the total spectrum of the bloom season, individual gardeners can enjoy very different flower forms and color patterns, the specific details of which are too numerous to list here. However, the basics of these characteristics can be simply summarized as follows:

A complete discussion of bloom characteristics would require a separate article unto itself, but the above list includes those most commonly discussed.

Basic flower colors include the aforementioned orange, plus yellow (including palest lemon, through bright yellow and gold, to orange), red (including many shades of scarlet, carmine, tomato-red, barn-red, maroon, wine-reds, rust-red and blackish reds), pink (from pale pink through rose-pink to rose-red), purple (from pale lavender and lilac to deep grape and violet), and melon or cream-pink (from palest cream shades to deep cantaloupe) buff, brown, apricot, and peach are thought to be variations of pink plus yellow. Near-whites are found among the palest tints of yellow, pink, lavender, or melon.

So, what is a gardener to do? Most importantly, have fun and enjoy the plethora of varieties available for planting in your home garden! To explore varieties readily available, see what is growing well in the gardens of your friends. Then, explore local, top quality garden centers and extensive online catalogs which are available from growers across the country. For a list of growers in our geographic region, and other regions with similar growing characteristics, the American Hemerocallis Society (AHS) offers a source list at: http://www.daylilies.org/AHSsource.html. Other growers are available via the internet and are not included in the list provided by the AHS.

Finally, remember, that even though daylilies are especially hardy perennials, they benefit from adequate water proper, fertilization, and six or more hours of sunlight daily. Achieving this balance will reward you, the grower, with the maximum number of blooms per bloom scape, multiplication of the fans on an annual basis, and the expected number and size of reblooms per variety. Only one caution when growing darker red and purple varieties in the DFW Metroplex, and other areas where of our afternoon temperatures in the summer exceed 95 degrees with ultraviolet ray exposure readings of 9+, or dangerously high (this is normally provided on a daily basis as part of the weather forecast on major metropolitan television stations): the bloom petals can experience sun scorch which is similar to sunburn on the exposed human skin. This phenomenon manifests itself as small, darkened areas of color and/or brown patches on the bloom petal(s) directly facing the unfiltered sun. While slightly detracting from the overall spectacular appearance of a bloom, it will not negatively impact the overall health of the individual daylily fan or clump.

Within a year or two of expanding your daylily varieties to include those from across the spectrum of color and every bloom period available to gardeners, especially including rebloomers, you, too, can be enjoying daylily blooms from April to September. So, get growing, and be rewarded with a spectacular and lengthy period of garden color!

Thanks to Bob Starnes, Master Gardener
2016