If there was something you could do in your own backyard to help a butterfly, would you do it? If it improved the look of your flowerbeds, attracted beneficial insects, and was good for the environment, would you think about it? It’s an important question, and worth your consideration because the monarch butterfly needs your help.

The monarch is a Texas resident only three months of the year. It’s unique because it spends its entire life migrating. A new generation is born here every spring during the months of March and April and it persistently travels north throughout the spring and summer, laying eggs along the way. By August, three to five generations have passed, and some monarchs have migrated as far as southern Canada. That’s quite a feat for an insect with a lifespan of six to eight weeks, but it doesn’t hold a candle to the task of the last generation of the year.

The last generation is born in August, and is quite different from its parents. Rather than six to eight weeks, this butterfly will live six to eight months and will migrate more than 2000 miles to a winter hibernation area in Mexico. This annual life cycle produces a super butterfly that is remarkably different from the previous generations. Because of this cycle, the monarch is unlike any other species of insect or animal on the face of the planet.

Each butterfly migrates independently, each responding to a unique set of environment cues. Yet the timing of their arrival in Mexico is so precise that it has become a national holiday there. The Day of the Dead is celebrated every year between October 31, and November 2; and it marks the arrival of the monarchs at the Sanctuary at El Rosario in Michoacán, Mexico.

Think about it. Millions of butterflies suddenly set out on a journey of 2000 miles or more. They are going to a place they have never seen. They are leaving from locations all over the northern US and southern Canada, yet they all arrive at their destination within a week of one another. How do they know when to leave? How do they know where to go? How do they travel so far on such delicate wings? And how does such a tiny creature have the stamina for such a journey? Scientists have been studying this phenomenon for years, and they are still trying to answer some of these basic questions.

Because of its unique life cycle, the monarch has been the focus of a great deal of research. Studies during the past 20 years have marked a 97% decline in the population of monarchs. This surprising loss has sparked a nation-wide effort to develop and maintain local habitat areas along the path of migration.  Monarch Watch is the lead organization, and they have developed a certification program for any individual or group that is willing to provide and maintain an area that will support the life cycle of the monarch (www.monarchwatch.org).

Monarchs and other beneficial insects live on the margins of society. They thrive in empty fields, undeveloped parks and recreational areas, uncultured areas around highways and roads, and margins between crop fields. We can help by developing these marginal areas into viable habitats that thrive from year to year. We can also help by providing habitat areas in our own yards and neighborhoods. Monarch Watch provides certification for areas that meet the habitat requirements for monarchs. By meeting a few simple requirements, you can have a Certified Monarch Waystation in your own backyard.

The Parker County Master Gardeners have spent a great deal of time thinking and planning for the arrival of the monarchs. They will be here in October, migrating through Parker County on their way to Mexico. We have several projects across the county where Monarch Waystations are being installed. A Waystation is a landscape that includes nectar-rich flowers to sustain adult monarchs, milkweed to sustain monarch caterpillars, and a maintenance plan to insure the integrity of the sight from year to year. 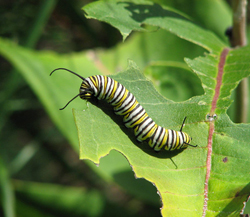 Our project at Soldier Springs Park is a joint effort between the Parker County Master Gardeners, the City of Weatherford, the Cross Timbers Chapter of the Native Plant Society of Texas, and a group of 4-H children who are participants in the Junior Master Gardener Program. The plan is to transform a small strip of cactus strewn pathway in the park into a wildflower-rich area that will qualify as a certified Monarch Waystation. Throughout the spring and summer, the children have been learning about the needs of the monarch and how to identify wildflowers. Seeds have been collected and made into seed balls, which will be spread in early September. We should all be noticing a remarkable difference in the area next spring. Hopefully, there will also be a noticeable increase in monarch activity because of the efforts of these children.

The wonderful thing about a Waystation is that it can be as small as 100 square feet. It can easily fit in a backyard, and the requirements are very similar to what you would provide in a simple flowerbed. The trick is to design the bed to provide a safe harbor for butterflies, and select plants that are suitable for hosting the monarch. Creating a butterfly garden is a great way to add to the beauty of your landscape, and it has great benefits for the environment. It also attracts beneficial insects that will be great helpers in your garden.