Nellie R. Stevens is a large evergreen shrub. It normally grows to the 15 to 25 foot range. It is tolerant of Parker County soils and can also withstand drought once established. It performs best in full sun but can tolerate partial shade. Give it a location with the best drainage available as consistently wet sites can damage its roots. 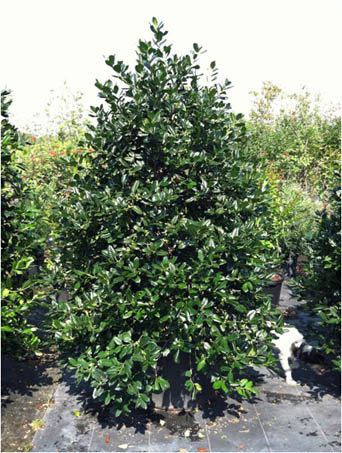 The Nellie R. Stevens (Ilex x 'Nellie R. Stevens') offers heat tolerance along with traditional holly beauty. It has the excellent vigor of most hybrids and also grows more rapidly than some other types.

Nellie R. Stevens has typical holly foliage that is glossy, deep green and remains densely beautiful year-round. It also is a prolific producer of bright red berries and has the advantage - unlike many other holly varieties - of not requiring a male tree nearby to produce fruit. The red clusters will be beautiful in winter until late February or early March, when a flock of cedar waxwings may swoop in and eat all the berries. A new crop will then appear in spring.

Nellie R. Stevens can be used singly or in mass plantings. A row placed five feet apart and left unpruned will quickly grow to make a perfect hedge.

The Nellie Steven Holly, Ilex x 'Nellie R. Stevens', is a very fast growing evergreen that provides year-round privacy. With a growth rate of up to three feet a year, it is an ideal choice for privacy screens and hedges. r3-2015