What do I need to know about the Kissing Bug and Chagas Disease?

The Kissing Bug has got lots of press in the past few months. The actual insect, genius Triatoma has been reported to have been located in Parker County. However, there are 38,000 varieties of ‘true bugs’ the suborder that the ‘kissing bug’ belongs. Only the Kissing bug is known to cause Chagas disease.

Below is an article from Mike Merchant of Texas A&M University.  Website: Citybugs.tamu.edu

Because most of us take little time to look closely at insects, it should not be surprising that recent television stories about “kissing bugs” and Chagas disease have created a frenzy of sorts among people thinking they have captured or seen kissing bugs around the home. While a few of these have turned out to be actual kissing bugs (genus Triatoma), most are not; and laboratories set up to identify and test kissing bugs have been overwhelmed this month with samples.

But not all insects vaguely resembling the pictures you might see on television or in the newspaper are kissing bugs. In fact, there are over 38,000 different kinds of insects in the “true bugs” suborder to which kissing bugs belong. So to make things easier, let’s review what to look for when a suspicious “bug” shows up in your home or landscape.

All insects in the suborder Heteroptera, to which kissing bugs belong, have piercing sucking type mouthparts, as opposed to the chewing mouthparts found on most larger insects. Such mouthparts are visible from the underside of the body, and are relatively easy to see on the kissing bug–at least with a good handlens or magnifying glass. Unlike some other large bugs, which have very thin mouthparts pressed against the body (plant feeding bugs), or heavy curved mouthparts (most predatory bugs), the mouthparts on kissing bugs are stout and straight.

Adult, fully grown kissing bugs range in size from 1/2 inch to over 1 1/4 inches long (usually about 1 inch-long). They are pear-shaped and dark brown to black in body color, often with distinct, reddish- to cream-colored stripes visible along the edges of the abdomen (tail). There are no markings on the wings, although some kissing bugs may show some orange at the base of the wings, next to the shield behind the head.
The head is stick-like but tapering, with eyes bulging from the sides and bottom of the head. Besides “kissing bug”, these insects are often called “conenose bugs”.
The six legs are relatively thin and tapering, not swollen or bulging. There are no distinctive spines or spikes on kissing bug legs, sides or top.
While some insects may have some of these characters, only insects with all of these characteristics are likely to be kissing bugs. Add to this that kissing bugs come out mostly at night, and it shouldn’t be too difficult to distinguish kissing bugs from all other insects.

For additional information: Go to http://kissingbug.tamu.edu/
Interactive map of found insects, FAQ, and instructions on how to submit a suspected kissing bug to Texas A&M labs. 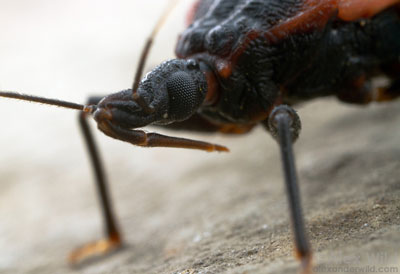 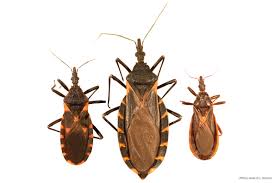 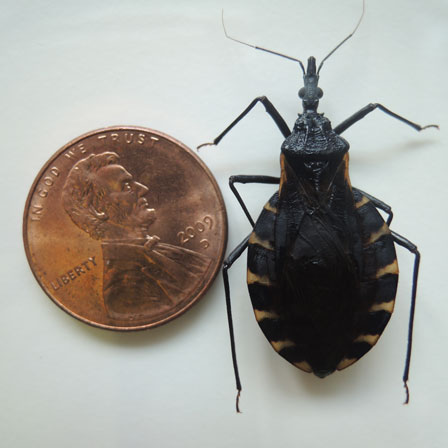